On Tuesday 20th February our own Ernie Patterson LRPS gave a workshop on freeze frame water-themed photography. He brought along an ingenious homemade system for triggering a flash to allow members to capture spectacular images of a dart (again homemade) bursting a water balloon. Ernie had rigged up a trigger in which the weight of the water balloon held a swtich (made from a clothes peg) open. As soon as the balloon burst, the weight went off the switch and the flash was fired. This was all done against a black background in a dark room. Ernie instructed us to use bulb mode and told us when to open the shutter and when to close it. In additon, one of our members brought along a fish tank and Ernie provided a red pepper to attempt capture of the pepper hitting the water. The evening was well attended by the club’s new novice members, who all enjoyed it greatly. Thank you, Ernie! 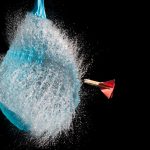 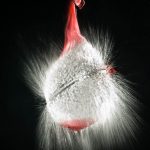 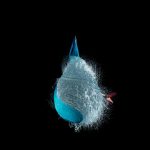