The CPA Photo Essay Competition was held on Tuesday 7th February and proved to be another interesting evening. Jim McKeever once more brought his experience to bear as our judge for the evening, asking the members to present their panels and explain their intended narrative, then opening the floor for discussion. Eight panels were entered, with subject matter ranging from seabirds to wine making, music festivals to helicopter flights. We discovered that, following Jim’s advice during the Photo Essay Competition last year, the members were now much more aware of what was required in presenting a narrative. Some were spot on, whilst others were nearly there – a good subject was chosen, the story flowed from a wide angle, to a medium shot with more detail, to a close up, very detailed shot, but perhaps other shots we had would have worked better. The emphasis doesn’t necessarily have to be on an image of suitable competition quality, but on one which tells the story regardless of quality.

Many congratulations to Pauline on winning the Stanley Matchett Trophy, her first in the club, and our thanks to Jim for once again leading a stimulating discussion. 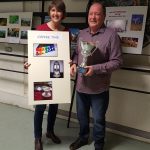