On Tuesday 27th March we had the two special competitions for photographs taken on Practical Nights at CPA and for those taken on Club Outings during the year. As usual for our in-house competitions, the winning images were selected by the club members who each voted for their top five images.

We had only three Practicals this season, two for portraiture and one for water photography, and this resulted in a small entry of 12 prints, 9 of which were portraits. Ossie Bruce won the Agnew Cup for his great image of a red dart bursting a blue water balloon, which scored a wopping nine points more than the second placed image.

There were 29 entries in the Club Outings competition, including images from the weekend trips to the North Coast and Co Mayo over the summer, the week-long trip to Lanzarote in February, and visits to Parkanaur and Pomeroy Forest Parks. The Moucka Shield was presented to Chelle McGaughey for a sunset shot of the salt pans at Salina de Janubio in Lanzarote. 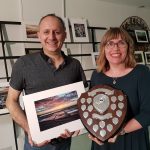 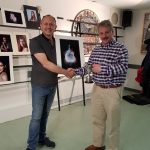